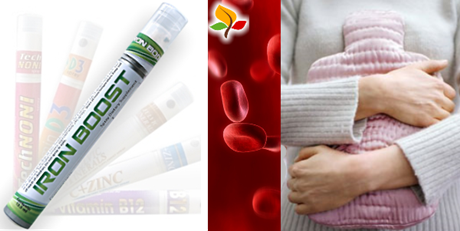 Iron is also needed for proper metabolism of B vitamins and the production of myoglobin (major protein of muscle cells) and certain enzymes. Recent research for direct measurement of the average bio-availability of iron in different Western-type diets found that absorption of iron through diet can be inhibited to some degree by a number of chemical micro elements common in food. Below there is a list of some of main inhibitors which can contribute to development of iron deficiency.

In North American and European diets, about 90 percent of phytates ( inositol hexaphosphate salts) originate from cereals. Phytates have been shown to strongly inhibit iron absorption in a dose-dependent fashion and even small amounts of phytates have a marked effect . Chemically, phytates are found in all kinds of seeds, grains, nuts, vegetables, roots (e.g., potatoes), and fruits:

Almost all plants contain phenolic compounds as part of their defence system against insects, animals and humans. Some of the phenolic compounds (mainly those containing galloyl groups) are responsible for the inhibition of iron absorption:

Calcium, consumed as a salt or in dairy products interferes significantly with the absorption of both heme and non-heme iron. However, because calcium and iron are both essential nutrients, calcium cannot be considered to be an inhibitor in the same way as phytates or phenolic compounds. For example, no inhibition is seen from the first 40 mg of calcium in a meal. A sigmoid relationship is then seen, reaching a 60 percent maximal inhibition of iron absorption by 300-600 mg calcium. The practical solution for this competition is to:

What is Iron Boost spray?

Iron Boost Super health spray is a natural source of dietary iron to increase energy and maintain the sufficient hemoglobin (a primary component of red blood cells that carries oxygen to your organs and tissues) in your body. It is formulated with a highly absorbable iron compound (sodium feredetate), manufactured under a proprietary patent. It has remarkable bio-availability and can deliver maximum benefit without the side-effects associated with some other iron supplements such as an unpleasant metallic taste and gastro-intestinal problems.

This spray can be a better choice for you because:

• it has no negative influence on the bio-availability of other minerals
• it’s least affected by iron inhibitors, especially in phytate-rich diets
• it exhibits minimal gastrointestinal disturbances
• it has a higher absorption rate in the human body
• there’s no risk of iron overload.