Considering taking a vitamin or supplement to treat Stress? Here you can learn more about our proprietary solution – Super Health B-Calm spray – which is based on carefully selected and well-researched herbs and vitamins traditionally used to improve mood and induce feelings of calmness. Because of its unique combination of ingredients,Super Health B-Calm spray is designed to support your body in dealing with stress on all levels, including physical, chemical, and emotional stress.

B-Calm spray includes such ingredients as Vitamins of the B group, Vitamin C and a proprietary blend of herbs. This complexer is designed to help reduce both emotional and physical stress. Those stresses can produce deteriorating effects on your immune system and lead to depression or an anxiety disorder. Anxiety can easily arise in response to life stresses such as pressure at work, financial worries or chronic physical illness. Our solution can provide a buffer and help ease unpleasant emotional states so you can get your quality of life back.

B-Calm Super Health spray is designed to help reduce both emotional and physical stress.Many aspects of life can cause stress, such as work issues, money problems or difficult relationships. When a person is stressed, it can get in the way of managing responsibilities, which in turn can pile on yet more pressure. Our bodies are well able to response to stress but many of us live in an almost constant state of stress.

As a survey published by the American Psychological Association found, 54% of Americans are concerned about the level of stress they experience everyday. When we feel out of control of our lives for a long period of time, our minds race and our bodies produce harmful levels of stress hormones.If not dealt with, stress can can affect our immune system and lead to serious problems such as high blood pressure, depression or the development of an anxiety disorder.

Cramp bark is a plant that grows in North America. Historically, Native Americans used cramp bark as medicine for reducing swollen glands and treating fluid retention, mumps, and eye disorders. Nowadays, the bark and root of this plant are used to make medicine for relieving cramps, including muscle spasms and menstrual cramps, as well as for increasing sleepiness.

Ginkgo biloba extract has been used for centuries in traditional Eastern cultures, often to improve memory and to treat circulatory disorders. The ginkgo tree is one of the oldest tree species in the world. Some research has shown that ginkgo can improve sleep in certain patients. For example, in 2001 one of studies published in “Pharmacopsychiatry” found that ginkgo improved sleep in depressed patients who reported that the ginkgo extract significant improved their sleep patterns and helped wake up less during the night. The researchers also noted that those who took the ginkgo extracts had their non-REM sleep phase enhanced.

Valerian root is a popular ingredient in pharmacology and herbal medicine as sleep remedy. It has been used to ease anxiety, insomnia and nervous restlessness since the second century A.D. According to the National Institutes of Health, there is good body of scientific evidence that it improves the quality of sleep and reduces the time needed to fall asleep, especially when taken nightly for several weeks. Scientists still debate on how valerian works. Some believe it increases the amount of a chemical in the brain called gamma aminobutyric acid (GABA). GABA has a calming effect on anxiety and helps regulate nerve cells.

In herbal medicine, feverfew is used in treating chronic headaches and  migraines that has been also recognised by the conventional medical practitioners (the British Medical Journal and the Harvard Medical School Health Letter published the success stories of relieving migraines by taking feverfew ). Additional benefits include lower blood pressure, less stomach irritation,  relieving the pain and inflammation of arthritis.

Passionflower is a protective antioxidant powerhouse containing flavonoids, sterols, cholorogenic acid, volatile oil and traces of alkaloids (including harmine, harman). Several sstudies indicated that  significantly reduced anxiety-like reactivity.  The British Herbal Compendium indicates its use for sleep disorders, restlessness and nervous stress. In several traditional systems of medicine this herb has been used as a sleep aid for occasional sleeplessness nights and for the treatment of epilepsy.

Vitamin C may help alleviate the body’s response to stress, according to P. Samuel Campbell, Ph.D., and other scientists at the University of Alabama in Huntsville.1 Vitamin C also works in conjunction with B vitamins to aide in the metabolism of the stress-related hormones dopamine, cortisol, adrenaline, and noradrenalin. Vitamin C is thought to help reduce the effects of chronic stress by inhibiting the release of stress hormones, thus preventing these hormones from dampening the immune response. Many studies have shown that stress can impair the body’s immune response, increasing the risk of infectious illness. Vitamin C may also reduce other indicators of physical and emotional stress, such as loss in body weight, enlargement of adrenal glands, thymus gland and the spleen.

Findings show the important implications for Vitamin C in the prevention of stress-related illness in athletes and anyone under high amounts of physical and/or emotional stress. The findings also suggest that current guidelines on recommended vitamin C intake may be too low.1

Niacin helps to maintain the proper health of your digestive system, skin and nerves, and B12 (cobalamin) is also needed for a healthy nervous system.

Pantothenic acid often referred to as the “anti-stress vitamin,” is critical to the manufacture of stress-related hormones produced in the adrenal glands2.

Pyridoxine has a positive influence on the production of the brain chemical serotonin. Changes in serotonin levels can alter the mood and affect a person’s ability to cope with stress.

Vitamin B12 along with Vitamin B6 are the two principal members of the B complex that have an effect on stress, and a deficiency of these may make you more prone to this frequently debilitating condition.

The biochemistry of stress is fairly complex and is based on the production and release of hormones into your bloodstream that triggers release of cortisol by the adrenal glands to speeds up the metabolism. Parallel, the cells of the brain stem and spinal cord send a message that stimulates the adrenal glands to secrete epinephrine. This increases the heart rate, breathing and alertness, ready for fight or flight. If this cycle continues over an extended period of time it can have serious repercussions on your mental and physical health. 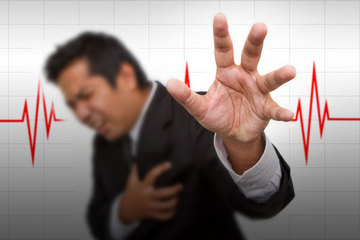 It is known that long term stress can cause fatal heart attacks and strokes, but scientists have never known why. For the first time scientists have found a direct biological link between stress and inflammation of blood vessels which can lead to heart attacks. Previously it was known that stress triggers our so-called ‘fight or flight’ mechanism which sends a surge of adrenalin to help the heart pump harder and increase blood flow in response to a perceived threat. But new research suggests that stress also sends the immune system into overdrive and worsens inflammation in the arteries.
When arteries become more inflamed they develop lesions which can break away. In attempt to prevent it, the body rushes blood platelets and clotting proteins to fill in. And that can cause huge problems if arteries are already thickened with plaque because a clot can enlarge in a matter of moments and completely obstructs the artery. This can trigger a heart attack.

How can B-Calm oral spray help?

Formula of B-Calm contains a proprietary blend herbal extracts, vitamins B group and vitamin C which help regulate the described above biochemical functions that reduces feeling of stress as well as the associated anxiety and depression. In fact, many of the symptoms of vitamin B deficiency are those that are also associated with stress: anxiety, nervousness, depression irritability and so on. The three B vitamins – vitamins B3, 5, 6 and 12 – have the most effect on stress because they are connected with the nervous system.